I can't recall a time when I haven't read comics.

Some of my fondest early memories are of trips to my grandparents in Suffolk, where I would beg to visit the newsagents, so I could root around in the cardboard box of old comics he kept - five for ten pence. Copies of Buster, Cor!, Whizzer and Chips, The Beezer, Shiver and Shake. Monster Fun...

Actually I need to do a separate post on Monster Fun, as I remember liking that one a lot.

Anyway, I bought as many as my pocket money would allow and devoured them avidly while laying on a rug in the garden during those endless school holiday summers we just don't seem to get any more.

There were occasional copies of TV Century 21, Countdown and the like. Maybe they were more expensive and I preferred to get more comics for my ten pence. Or maybe they were not that well distributed in my area. I can't really recall. I do remember seeing some of those early Doctor Who strips though.

I bought more comics at home through "jumble" sales (the precursor to today's boot sales). Comics sold in rolls of ten tied up with elastic bands. There was always a pile in the corner of my bedroom. In between all the books there were always comics.

But ultimately these were disposable entertainment. One or two page comedy strips with cartoon characters and no ongoing plot. There were a few adventure stories - General Jumbo, The Steel Claw and Adam Eterno perhaps (my memory may be getting timelines mixed up) but these tended to be all over in one issue. Who cared if they got ripped, or lost or coloured in with felt tip pens?

Then in February 1976, when I was almost nine years old, something came along that changed all that. "Action" comic had arrived. 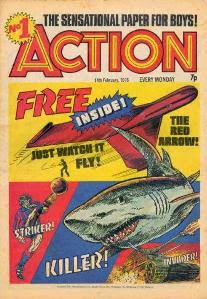 The UK comics industry of the 1970's was pretty much dominated by two major companies - DC Thomson and Fleetway / IPC. Thomson were publishers of the Beano, Dandy and Beezer. IPC produced Buster, Whizzer and Chips, etc. I'm pretty sure that read more IPC comics than any others.

Although at this point we were 30 years on from the end of World War II, the conflict was still a big presence in people's minds. In 1974, DC Thompson released "Warlord" - an adventure strip comic for boys focussing on stories set during the war. It was a huge success.

In response, IPC tasked comics legends Pat Mills and John Wagner to create a rival comic - "Battle Picture Weekly". This was also enormously popular, and contained some strips now regarded as outright classics (although I didn't read the strips until much, much later, having no interest in an all-war comic at the time).

Wanting to capitalise on the success of "Battle", IPC decided they wanted something similar but with a more contemporary feel. Springing from Mills' mind against a   backdrop of social unrest in the UK and huge changes in fashion and music, it was revolutionary. This was a comic freely ripping off Hollywood with a unique British slant, pushing the boundaries and setting out to shock.

Of course at age eight I wasn't aware of any of this. All I knew was that "Action" was like a lightning bolt directly into my brain. Even now those early issue are indelibly stamped into my memory.

The movie and social influences are obvious in those first strips. "Dredger" was a British Dirty Harry. "Look Out For Lefty" included elements of football hooliganism which was a very hot topic at the time. "BlackJack" - the story of a black boxer who is in danger of losing his sight - actually prefigured "Rocky" by a good few months. "Hellman of Hammer Force" was a WWII story but with the Nazi major as the anti-hero. Then there was "Hook Jaw"...

Blatantly ripped off from "Jaws", Hook Jaw turned the gigantic man-eating Great White shark into the hero of the story, pitting him against corrupt or criminal humans looking to exploit the oceans. Illustrated in gory detail (often in glorious blood-soaked colour in the centre pages) Hook Jaw was the breakout star of Action, treating us mere mortals as nothing more than a food supply to be ripped apart. 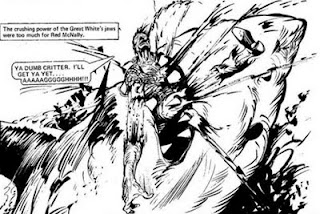 A controversial inclusion right from the start, Mills had no problem with killing off as many humans as possible in as many grisly ways as possible, while maintaining an environmental undercurrent. What kid wouldn't love it? It was the talk of my playground.

In fact Mills kept pushing the boundaries, when in issue 31, Hook Jaw actually manages to kill the human 'hero' who has been pursuing him since issue one, leaving just his severed head... 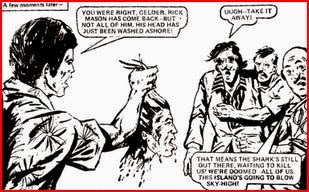 I remember that panel so clearly. A real shocking cliffhanger.

As enjoyable as Hook Jaw was, it took until issue 13 for my own personal favourite story to turn up - the "Rollerball" inspired "Death Game 1999".

Set in a dystopian future (1999 seemed *such* as long way off to a young boy sat in 1976) the premise was that teams of criminals on death row or with life sentences competed in the ultra violent sport Spinball to try and win their freedom.

Spinball was a mash-up of ice hockey, motorcycle derby and insanely, pinball - with gigantic flippers and bumpers flinging steel balls at the poorly protected players at high speed. There was more than a hint of the ancient gladiatorial arena, with the bloodthirsty crowds hungry to watch the next poor soul be smashed in the face by a ball, or mangled under the spiked wheels of a roaring motorcycle.

They get their wish in the very first instalment, when 'Karson City Killers' Captain Al Rico attempts a 'Death Run' against the whole of the opposing team to get his coveted million points and a full pardon. Sadly his quest to gain the black pin results in him being crushed to a bloody pulp by one of the flippers against the wall of the Spinball-drome.

(some early Ian Gibson work there)

Meanwhile, washed up football star Joe Taggart is mistakenly accused of beating someone to death. Using his influence, corrupt Karson City governor Henry Smailes arranges for Taggart to be incarcerated at his prison, and coerces him into becoming the new leader of the Spinball team. Thus the stage is set for an epic battle of wills against a backdrop of a gory sport where death is an almost certainty.

Veteran writer Tom Tully cleverly layers the plot across several weeks as Taggart gradually builds a new squad and starts to win the respect of his fellow inmates - despite losing a few along the way in a number of savage games - all to further his goal of completing a Death Run and getting out of prison. Eventually Smailes realises that his star player is getting a little too popular with the fans and decides to bump him off.

Secretly, the governor has kept the hideously injured Al Rico on ice, and with the aid of the aptly named Doctor Jekyll, turned him into a rampaging hate-filled cyborg with only one mission - kill Joe Taggart! 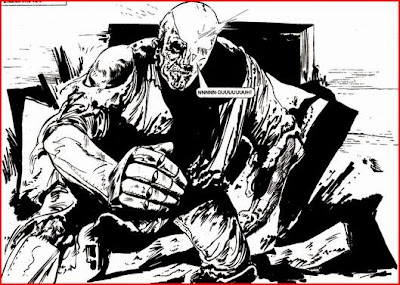 Now you know how certain images will stick in your mind? Well that drawing above of the cyborg Rico smashing his way out of his cell positively haunted me for weeks. I felt uncomfortable looking at it, yet couldn't help but keep going back to the issue and taking another peek. It was probably one of my first experiences of the influential power of comics. Death Game 1999 was futuristic, violent, brutal and I loved every panel.

In the end, Action became a victim of it's own success at stretching the limits of what was possible in a British boys comic of the 1970's. The grim and gritty storylines and graphic violence (particularly in a strip called "Kids Rule OK") drew the attention of the media over the hot summer months. They went to town with lurid headlines like "Comic Strip Hooligans!", dubbing the comic "the seven penny nightmare". Doctor Who's deadliest enemy, the moral activist Mary Whitehouse, got involved and started a campaign to get Action banned.

Editor John Sanders faced an antagonistic interview abut the comic on an early evening news show on BBC1. Publishers IPC then began to get pressure from the main high street retailers ,who threatened to not only withdraw Action, but all IPC magazines from their shelves. Finally, after issue 36 had been published in October 1976, they caved in and pulled the comic from sale, pulping the next issue completely.

Now while I do recollect seeing the TV interview ("they're talking about my comic" I said to my parents), I knew nothing else about the drama going on behind the scenes. All I noticed was that when I rode my bike to the newsagents on that Saturday morning in October to get a newspaper for my dad, Action was suddenly no longer there to buy. I was slightly annoyed to say the least!

Eventually, five weeks later, Action did return to the shelves, but it was a shadow of it's former self. Scripts had been amended, violence reduced and gory deaths were non existent.To be honest I can't recall how much I noticed the difference, because my memories of that time are mixed up with what my adult self knows now about the changes. In any case, the neutered comic limped on for another 12 months before merging with "Battle".

One thing that I do remember though is that Death Game 1999 wrapped it's storyline up incredibly quickly in four short pages, changing it's name in the process to the less objectionable "Spinball" (followed by "Spinball Slaves" and "Spinball Wars"). Although markedly less violent, the successor strips are at least notable for featuring early work by Massimo Bellardinelli and later some simply superb illustrations by Ron Turner: 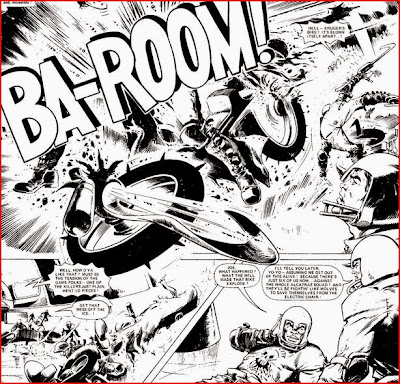 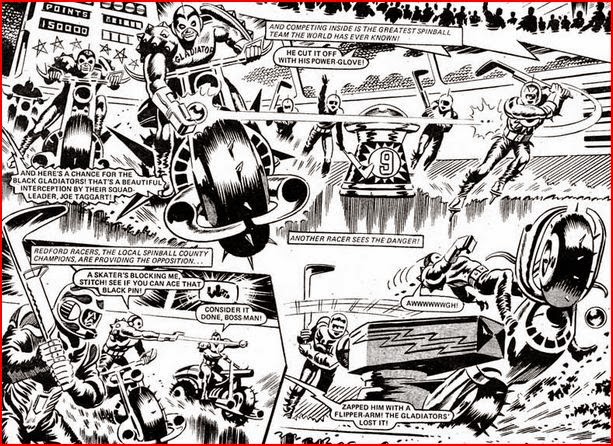 Action may have been castrated, but it's legacy was huge - both in the industry and with me personally. I would never be satisfied with simple old humour strips again. I wanted adventure comics - the more SF flavoured the better. Luckily, in a few short months I would get my wish - Pat Mills had taken the lessons he learned from the Action controversy and applied them to his next comic launch - a title that looked to the future for it's inspiration.