The Book Tower 1 - The Monster Show by J.R. Southall

Before anyone asks - yes that "The Book Tower" title is a direct lift from the Yorkshire Television series that ran from 1979 to 1989.

The first three years were presented by Tom Baker, so since this blog contains a lot of stuff about Doctor Who - and as this first post is reviewing a book *about* the show, it seemed quite apt.

It's only proper at this juncture that  I post the obligatory picture of Mr Baker: 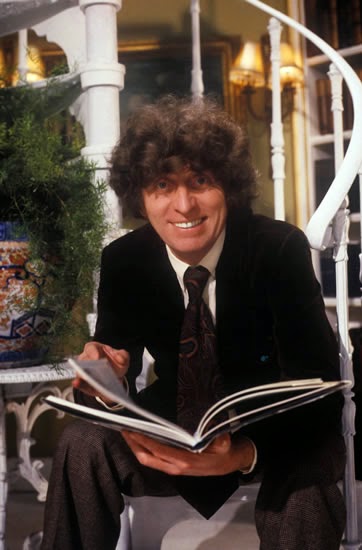 Podcasts have become a big part of my life in recent years. The first Doctor Who podcast I ever listened to was in July 2012 - Episode 17 of the Blue Box Podcast, hosted by the author of today's book - J.R. Southall.

Before becoming internationally famous as a podcaster and writer for Starburst magazine, J.R. had already written a significant number of reviews and articles for the Doctor Who Magazine Facebook group, the fan forum Gallifrey Base and various fanzines. "The Monster Show" collects those pieces, along with several new ones.

The book is sub-titled "Essays and reviews on a theme of Doctor Who" and it's a very varied collection - therein lies it's strength to my mind. A large portion of the book is taking up with 'capsule' reviews of every story from An Unearthly Child through to The End of Time, all written in J.R.'s entertaining relaxed style - full of side digressions and parentheses. Interspersed between these at the end of every Doctor's era are longer themed essays on a variety of subjects.

Each review is between one and two pages long and encapsulates J.R.'s personal feelings on the story along with some key information on why it did or did not work as well as it could have. There are a few repeated phrases that crop up in the reviews - four Tom Baker one's in a row begin with an "Ah!", which made me laugh (I guess that's an effect of them being written out of sequence over a longer period of time) - but this doesn't grate, and each one has something interesting - and more importantly positive - to say about each story.

As enjoyable as the reviews are (and trust me they are *very* enjoyable - reading or listening to anything from J.R. is never dull), it's the longer pieces that are the real highlight for me.

'The Monster Show' examines why Doctor Who has become synonymous with fighting bug-eyed creatures from outer space.

'Regeneration' looks at the craziest concept in SF - changing your lead actor every few years.

'The Good, The Bad and the Meglos' asks why are story titles so important to attracting viewers.

'Nothing New Under the Sun' suggests that story arcs and series finales existed long before the series came back in 2005.

There are many others, but my personal favourite is 'Canonicity and the Literary Agent Hypothesis', in which J.R. not only dives into the shark-infested waters of the "what is canon?" question (or 'canonical' as Mark Gatiss would insist on) *and* manages to emerge with his brain cells intact, but also illustrates how you can explain away all the inconsistencies using a theory developed by Sherlock Holmes fans! It's a fascinating piece of writing. As he rightly says "..we should never apologise for which bits of Doctor Who we like..."

J.R. has an infectious love (no, we never call it an obsession) of Doctor Who and that coupled with his encyclopaedic knowledge means that these in-depth essays are always engaging and informative.

These days it seems you can't move for fans writing reviews and blogs about Doctor Who. It's a tradition, or an old charter, or something. Ahem. 1

But as much as this is a book of reviews and personal opinion, it's also a great insight into one fan's love for the show, it's ups and downs, successes and failures -  and what makes it so special for so many. 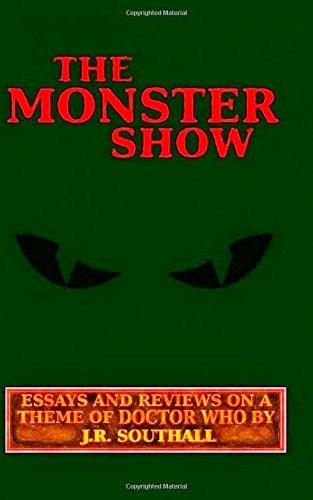 "The Monster Show" is available from Amazon in paperback and for Kindle. It's also worth noting that this is the first title published under J.R.'s new "Watching Books" self publishing imprint. I can only hope that they are all this well put together.

1 Sorry Al, I couldn't resist !
Posted by Kevin Jordan at 8:20 am
Labels: Book Tower, Doctor Who